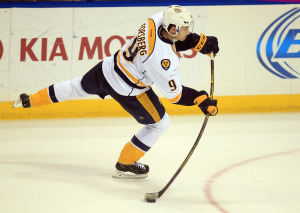 Neal scored the game-winner on a wrist shot from the top of the left circle with 6:28 remaining after taking a drop pass from Filip Forsberg.

The Blues (9-4-1) got a first-period goal from Jori Lehtera. Elliott made 33 saves for St. Louis, which finished a stretch of four games in six days.