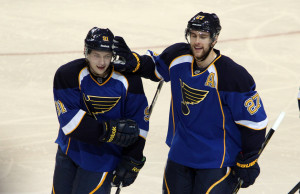 Jake Allen was just three minutes and 25 seconds away from recording three consecutive shutouts but instead settled for a 24-save victory as St. Louis escaped with a 4-3 result over New Jersey in the back end of a home-and-home set.

Allen made 24 saves to blank the Ducks on Oct. 30, then stopped 26 shots in a 1-0 decision against the Devils on Tuesday to open the brief set. He was measured by Michael Ryder late in regulation, however, to end the scoreless string, which set the franchise rookie record at 184 minutes, 38 seconds.

Jaden Schwartz and Vladimir Tarasenko each posted a goal and one assist for the Blues, who extended their season-best win streak to seven consecutive games. Alexander Steen and David Backes added power-play markers for the hosts.

Ryder tallied twice and Marek Zidlicky once for the Devils, who avoided being shut out in back-to-back games for the first time in more than a year.

Cory Schneider was pulled early in the third period after allowing three goals on 25 shots. Keith Kinkaid finished the contest with three stops on four chances.

Ryder finally connected for the Devils just after a power play expired to pull the visitors within 3-1, but Alex Pietrangelo fired away and Backes tipped it home on the man advantage just 53 seconds later to restore the Blues’ three- goal margin.

Only 41 seconds later, a Zidlicky blast rippled the net to pull the visitors within two, and after removing Kinkaid for an extra skater, they climbed within one as Ryder rifled home a Jaromir Jagr pass with 50.5 seconds to play.

“We found a way to find the net and put them on their heels…but it wasn’t enough,” Devils coach Peter DeBoer said.

Allen then had to quickly slide across his crease from right to left to rob Travis Zajac with 10 seconds remaining and preserve the one-goal decision.

“They really pushed us hard. We pushed hard back in the third,” Blue head coach Ken Hitchcock said.

Tarasenko opened the scoring with five seconds left in the opening period, when he danced between a pair of defenders, pulled Schneider out of position at the left post and scored on his forehand.

It was 2-0 for the Blues at 11:05 of the second period as Barret Jackman threw a lead pass from his own defensive zone up the middle for Schwartz, who was left alone to score with a high wrister.

Steen’s tip of a Jori Lehtera offering put the hosts up by a seemingly- comfortable 3-0 score at 7:10 of the third period and spelled Schneider’s exit.

Allen stopped all 22 shots faced in the first 40 minutes of play.