Someone is going to hit the “on” switch at Missouri’s only commercial nuclear reactor in a few days. In a plant where so many things are supersized, it’s the little things that make it go. 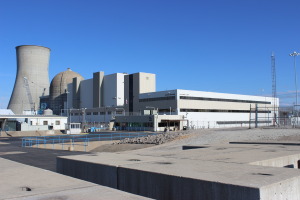 Ameren’s Callaway Nuclear Reactor shuts down every 18 months for refueling, installation of any new equipment, and system checks and repairs.

This time, workers are replacing the nuclear reactor vessel head, a $145 million, 42-foot high, 288,000-pound assembly that houses the control rod drive mechanisms. It replaces the original 30-year-old part and will last through the next plant relicensing in ten years, and well beyond.

But all of that giant hardware won’t produce one watt of electricity. That’s done by thousands of ceramic uranium pellets about three-quarters of an inch long. Each can provide as much energy as a ton of coal.

Callaway’s Senior Director of Nuclear Power, Barry Cox, says one-third of the pellets are replaced every 18 months. “We’re taking out 84 spent fuel assemblies…and we’ll replace those fuel assemblies with new fuel assemblies,” he says, “Each fuel assembly is about 8 1/2 inches by 8 1/2 inches square and then 12 feet tall and it contains a little over 200 fuel rods.”

Those fuel rods contain about 6.3-million of those little pellets. It takes 19 million of them to keep Callaway providing twenty percent of the power used by 1.2 million Ameren customers in 63 of Missouri’s 114 counties.

The company turned off Callaway on October 11th. Cox says it will be back on by the end of this month.