You are here: Home / Sports / Tarasenko’s seventh goal of the season is just ridiculous. Then he ends the game with a shootout goal as Blues win fifth straight (VIDEO) 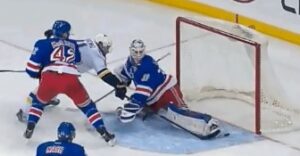 Victor Tarasenko uses nifty stick work to score his seventh of the season.

Blues forward Alexander Steen and Rangers forward Lee Stempniak scored in the second round of the shootout and after Brian Elliott poked the puck away from Rick Nash, Victor Tarasenko ended it with a goal past Rangers goalie Cam Talbot as St. Louis won their fifth straight with a 4-3 shootout win over New York at Madison Square Garden.

Captain David Backed called Tarasenko world class after he notched his seventh goal of the season, which came on the powerplay in the second.  It was Tarasenko’s sixth goal in four games.