You are here: Home / Sports / If Mizzou cleans up their penalty issues on Saturday, there is no reason why the Tigers shouldn’t be able to run all over Kentucky (Google Hangout) 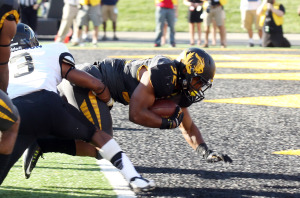 Missouri Tigers Russell Hansbrough dives into the endzone against the Vanderbilt Commadores in the second quarter at Farout Field in Columbia, Missouri on October 25, 2014. UPI/Bill Greenblatt

Mizzou-Kentucky this Saturday, the Wildcats are much improved in terms of their record at 5-3, but they give up a ton of points in SEC play…they haven’t won on the road yet this year and they give up a bunch of rushing yards.  What a perfect team to help Mizzou snap out of their offensive funk.

So far in SEC play, here’s the total number of points the Wildcats have allowed:  36 to Florida, 38 to South Carolina, 41 to LSU and 45 to Mississippi State. It could mean big days for Russell Hansbrough and Marcus Murphy.   I talked with Shane Bailey of SECSportsRoundTable.com and  he agrees Kentucky can’t stop the run, but they are an improved team.

Mizzou has to cut down the penalties too, those are drive killers. 15 flags last week, many against the offensive line for false starts. Gary Pinkel said its simple…it comes down to focus and discipline.  If the Tigers bring that on Saturday and stay committed to the run, the Tigers could get into the low 30’s for points.

We break down the Wildcats on this Google Hangout.