You are here: Home / News / Nearly 200 apply in one week for Ferguson Commission

The response to Governor Jay Nixon’s call for the formation of a Ferguson Commission has been strong. 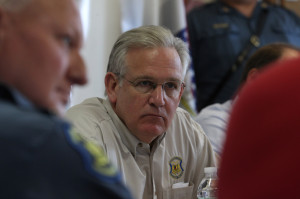 By Tuesday morning, one week after Nixon announced the commission, 199 people had applied online to be a member. Nixon wants the group to look at the “challenges that were exposed and exacerbated by the death of Michael Brown and its aftermath, and offer specific recommendations for overcoming them.”

By the weekend, Nixon’s office tweeted that the response was “overwhelming.” His official Twitter feed added that he is, “Inspired by St. Louisans’ willingness to step up and serve.”

Nixon told reporters that the commission would have about 15 members, whose selection would be announced in November.

Those who want to apply can do so on the state’s website.