You are here: Home / News / “Mr. Mizzou,” John Kadlec dead at 86. Kadlec spent 50 years associated with the university as a player, coach, administrator and broadcaster (AUDIO) 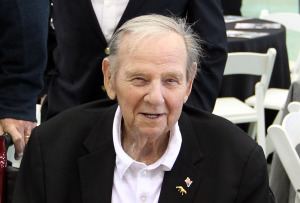 Former University of Missouri football player and assistant football coach John Kadlec, shown in this April 12, 2014 file photo, had died at the age of 86 in Columbia, Missouri on October 29, 2014. A native of St. Louis, Kadlec was recruited by legendary Mizzou Head Coach Don Faurot. He was an all-conference lineman during his time at Mizzou and went on to serve as an assistant football coach under Faurot as well as Frank Broyles, Dan Devine and Al Onofrio. UPI/FILES/Bill Greenblatt

John Kadlec died early Wednesday morning in Columbia at the age of 86.

He first came to Mizzou from his native St. Louis, Mo. to play football for Hall of Fame Coach Don Faurot in 1947.  After earning his degree from MU, he stayed on as a graduate assistant coach for Faurot, and he coached the freshman team until 1954 when he moved up to varsity, where he served through 1969.  After a stint at Kansas State from 1960-66, Kadlec returned to Mizzou to serve on the staffs of Dan Devine and Al Onofrio, coaching from 1966-77 on the Tiger sideline.

After his coaching days ended, Kadlec returned to Kansas State as Director of Development, before coming home to Mizzou in 1986 as Director of the Tiger Scholarship Fund, and he was a fixture in Columbia ever since in numerous roles for Athletics, most closely associated with fundraising.

In 1995, Kadlec became the color analyst for Mizzou Football games on the Tiger Radio Network as an emergency replacement when the spot came open unexpectedly just days before the season opener.  At the request of former Director of Athletics Joe Castiglione, Kadlec joined Mike Kelly on the call for what he thought would be a one-game stint that ended up lasting 16 seasons in all, until he put down the microphone after the 2010 season.

Kadlec was a 1996 inductee into the MU Athletics Hall of Fame, and in 2005, the grass practice fields behind the Mizzou Athletics Training Complex were named in his honor.

Service information is not yet finalized, but will be passed along as soon as it is available.

Hear a sample of some of John’s more colorful moments on the Tiger Network with Mike Kelly.  (Courtesy/Learfield Sports)

“John Kadlec was a special person. He was one of those rare people who made everyone feel special. The way he could light up a room was really something to see. He loved Mizzou so much and was such a blessing to those of us who had the good fortune of being part of his life. I worked closely with Coach on many issues over the years, and he never hesitated to be direct, supportive and straightforward. His honesty and candor were his trademarks. I’ll always treasure my time with him and his family. There will never be another person like John Kadlec We will miss him.”

“Coach was such an amazing man, he was an absolute treasure for anyone who knew him. For me personally, he was someone I could always talk to, he always had some great wisdom to share, and he was always there for me in the toughest times. He was a ball coach, plain and simple, and he loved Mizzou with all he was worth. It’s hard to put into words how much he’ll be missed.”

Mike Kelly, Voice of the Tigers and longtime broadcast partner

“I can’t imagine a more dedicated servant to the University of Missouri than John Kadlec. He was such an impressive man, all the years he devoted to Mizzou and to the football program he loved so much, and the impact he had on the lives of thousands of people, including me, was just amazing. He was a devoted husband, father, and friend to so many. It’s heartbreaking to lose him, but somebody like Kaddy will never be forgotten.”