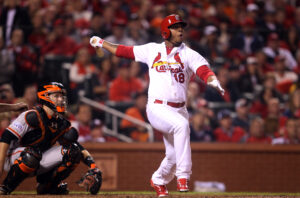 St. Louis Cardinals outfielder Oscar Taveras (22) shown in this file photo at Busch Stadium in St. Louis on October 12, 2014, has reportedly been killed in a traffic accident in his home country of the Dominican Republic on October 26, 2014. Taveras’ girlfriend also died in the crash, according to police in Puerto Plata. UPI/FILE/Bill Greenblatt

“I was asked last night to give some words regarding the tragic death of Oscar Taveras, but I just simply couldn’t.

First of all, it felt like a bad dream that could not be real, and when reality kicked in, my words didn’t even seem to make sense.  To say this is a horrible loss of a life ended too soon would be an understatement.  To talk about the potential of his abilities seemed to be untimely.  All I wanted to do was get the guys together and be with our baseball family.  I know the hurt that comes along with buying into the brotherhood of a baseball team.  That hurt is just as powerful as the joys that come with this life. Not to say it is even close to the depth of pain his true family is going through, but the pain itself is just as real. The ache is deep because the relationships were deep, and forged through time and trials.

To the many fans who have already reached out with condolences, and to the many more who are in mourning, thank you for taking these players in, like they are one of your own.  This level of care is what sets our fans apart.

In my opinion, the word “love” is the most misused, and misunderstood word in the English language.  It is not popular for men to use this word, and even less popular for athletes.  But, there is not a more accurate word for how a group of men share a deep and genuine concern for each other.  We loved Oscar, and he loved us.  That is what a team does, that is what a family does. You will be missed, Oscar.”