You are here: Home / News / Cardinals outfielder Oscar Taveras killed in a car accident in the Dominican Republic. Mozeliak “simply can’t believe it.” 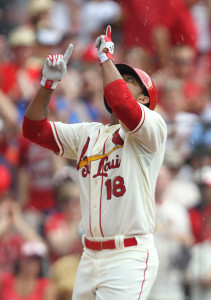 Taveras is making his major league debut in this game. UPI/Bill Greenblatt

Taveras was signed by the St. Louis Cardinals as an amateur free agent in 2008.

“We are all stunned and deeply saddened by the tragic loss of one of the youngest members of the Cardinals family,” Cardinals Chairman Bill DeWitt Jr. said.   “Oscar was an amazing talent with a bright future who was taken from us well before his time. Our thoughts and prayers are with his family and friends tonight.”

“I simply can’t believe it,” said John Mozeliak, Sr. VP & GM of the St. Louis Cardinals.  “I first met Oscar when he was sixteen years old and will forever remember him as a wonderful young man who was a gifted athlete with an infectious love for life who lived every day to the fullest.”