You are here: Home / Sports / Mizzou focuses on the run game late in the first half, but then Vandy responds. Three point lead at halftime 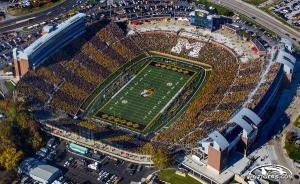 The Missouri running duo of Marcus Murphy and Russell Hansbrough have combined for 102 rushing yards, 51 apiece.  The Tigers held a 3-0 lead after the first quarter and finally committed to the run late in the second quarter.

The Tigers put together a 12-play, 77 yard drive that took 5:16 off the clock with ten of those runs coming from Murphy, Hansbrough and a run from Ish Witter.  Those three combined for 68 yards.  On a 4th and 1 from the ten, Hansbrough went off tackle right to put the Tigers up 10-0 with 3:19 left in the first half.

Vanderbilt put together a 75 yard drive and scored with eight second left when Johnny McCrary found tight end Tommy Openshaw for a nine yard pass.  Prior to that last drive, Mizzou held Vandy to just 53 yards on 23 plays.

Maty Mauk is 4 of 10 for 50 yards.  His longest pass was a 35 yard completion to Jimmy Hunt in the first half.