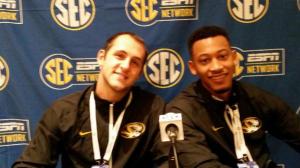 It’s the men’s turn at SEC Basketball Media Days in Charlotte, NC.  Ryan Rosburg and Jonathan Williams III joined head coach Kim Anderson for the event earlier today.  The Tigers were picked right in the middle of the pack at 7th.

Kentucky was predicted to win the 2015 Southeastern Conference men’s basketball championship in voting by a select panel of both SEC and national media members.  The Wildcats, who are the overall preseason favorite for the 10th time since the 1998-99 season, tallied all 20 first-place votes.

No Tigers were picked to the preseason team, but I have no issues with that at all.  Keep the outside expectations low and fly under the SEC radar in the first season of Anderson and it will keep unnecessary outside pressure off.

Phil Kornblut sat down to chat with Rosburg and J3.

The Phil joined me on a Google Hangout and we were discussing the Tigers, when he got kicked out of his prime seating location.  Enjoy the video!