The arguments of a condemned Missouri inmate that he should get a new trial have been presented to the state Supreme Court. 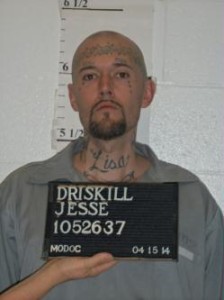 Jesse Driskill is held at the Potosi Correctional Center.

The key argument of Jesse Driskill is that his panic attacks prevented him from participating in his own defense and from being present while a jury decided his fate.

His attorney, Rosemary Percival, says Driskill was denied medication, and says the trial court should have ordered a new competency evaluation instead of relying on previous ones.

“It was error for the court to simply say, after reading the written opinions I believe this one instead of that one because this one’s more recent,” Percival told the Supreme Court.

Assistant Attorney General Shaun Mackelprang says the trial court worked around Driskill’s panic attacks by granting recesses when he had one, and allowing him to view proceedings by live video while talking to his attorney by text or phone.

“There would be moments – temporary moments … where he wouldn’t be able to consult with his attorneys, but that was something that I think the trial court reasonably concluded could be managed,” argued Mackelprang.

Driskill was sentenced to death last year for the murders in 2010 of Johnnie Wilson and his wife Connie in their rural Laclede County home. He also says the court at his trial violated his constitutional rights by not letting the jury see all evidence while considering his sentence.

The court could issue a ruling at any time.