You are here: Home / Sports / Molina hurt in the sixth inning. Has an oblique strain and his status for the rest of the series is up in the air 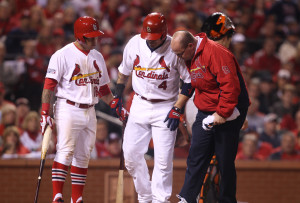 St. Louis Cardinals Yadier Molina (4) is helped off the field after swinging in the sixth inning against the San Francisco Giants in Game 2 of the National League Championship Series at Busch Stadium on October 12, 2014. Molina left the game. UPI/BIll Greenblatt

All the news was not good.  Gold Glove catcher Yadier Molina left in the sixth inning with an oblique strain and manager Mike Matheny said he will not make the trip, with Game 3 resuming on Tuesday afternoon in San Francisco.

A.J. Pierzynski, added to the NLCS roster may get the chance to start.  Tony Cruz is also on the roster.

Molina left in the sixth inning after hitting into a double play.  The injury is bad enough in that Molina will not travel on the team charter flight to San Francisco.

“We don’t know much more about it right now,” said Cardinals manager Mike Matheny. “But [it] didn’t look real good.”