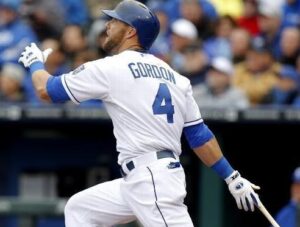 The small-ball Royals flexed their muscles in Game 1 of the American League Championship Series.

Naturally, it came in extra innings.

Alex Gordon crushed a leadoff homer in the 10th and Mike Moustakas added the deciding two-run blast as Kansas City pulled out an 8-6 win over the Baltimore Orioles on a rainy Friday at Camden Yards.

The Royals reached their first ALCS in 29 years thanks to three extra-inning wins, one against the Athletics in the wild-card game and two in their sweep of the MLB-best Angels.

Their fourth set an MLB record for a single postseason.

“We just find ways to win ballgames,” Royals manager Ned Yost said. “These guys will find a way to get it done.”

Gordon broke a 5-5 tie when he turned on a Darren O’Day fastball and sent a screaming line drive into the right-field seats for his first career postseason home run.

Brian Matusz relieved O’Day and served up Moustakas’ third round-tripper of the postseason, which proved vital after Greg Holland gave up a run in Baltimore’s last at-bat.

Delmon Young hit a pinch-hit, RBI single with two outs, and with runners on first and second, Nick Markakis represented the winning run at the plate.

Holland, though, got Markakis to roll over on a pitch and send a grounder to second, escaping with his third save of these playoffs.

O’Day (0-1) turned from hero to goat after working out of a bases-loaded jam in the ninth, and the Orioles will look to rebound Saturday in Game 2.

The Royals will send rookie Yordano Ventura to the mound for a quick turnaround at 4:07 p.m. (et), while Baltimore counters with Bud Norris.

Known for manufacturing runs during the regular season, the Royals went deep three times in the opener, as Alcides Escobar broke a scoreless tie and ignited a big third inning with a solo shot off Chris Tillman.

Gordon, whose three-run double fueled the Royals’ closeout win against the Angels on Sunday, stepped in with the bases loaded and cleared the bags again with a broken-bat blooper that fell just inside the right-field foul line.

Markakis led off the bottom of the third with a double and scored on Adam Jones’ base hit to pull Baltimore within 4-1, but the Royals got the run back on Billy Butler’s sacrifice fly in the fifth.

James Shields was unable to maintain the lead.

The Royals starter gave up consecutive singles to open the fifth and allowed a run on Nelson Cruz’s double off the left-field wall. After J.J. Hardy struck out with the bases loaded, Ryan Flaherty laced a double down the right-field line to plate two more.

“I was proud with the way our guys battled back, especially with Shields out there,” Orioles manager Buck Showalter said.

Rookie Brandon Finnegan relieved Shields in the sixth and yielded the tying run. Jonathan Schoop worked a leadoff walk and moved to second on Markakis’ base hit. Catcher Salvador Perez threw behind Schoop and had him picked off, but Escobar’s throw to third hit Schoop in the back, leaving runners on second and third.

Alejandro De Aza then fisted a blooper into no man’s land behind the mound, and Schoop scored without a play at the plate.

The Royals ran themselves out of a run in the seventh when Jarrod Dyson’s foot came off the bag trying to steal second base. He was called out, and Eric Hosmer followed with a single that would have easily plated a run.

Kansas City wasted another scoring chance in the ninth after Zach Britton walked the bases loaded. Hosmer hit a chopper to first, and Nick Hundley made a nice backhanded stop of Steve Peace’s one-hop throw to the plate to get a force out.

O’Day took Britton out of his misery and kept it 5-5 by inducing a double-play ball off the bat of Butler.

Kelvin Herrera and Wade Davis (1-0) both tossed two flawless innings out of Kansas City’s bullpen. Davis struck out the side in the ninth on 11 pitches to collect the win.