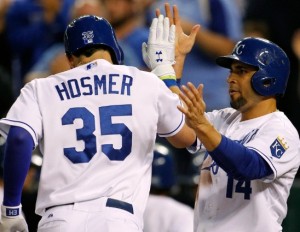 Eric Hosmer beat his chest as he rounded first base.

Some of his teammates were out of the dugout before the ball even cleared the wall.

Yes, the Kansas City Royals did it again, winning a third straight postseason game in extra innings to set a major-league record.

Hosmer hit a two-run homer in the 11th inning to break a tie and the Royals beat the Los Angeles Angels 4-1 in Game 2 of their AL Division Series on Friday night.

The Royals take a 2-0 series lead back to Kansas City with a chance to close it out in Game 3 on Sunday after getting dramatic wins on consecutive nights in Anaheim.

They took Game 1 on Mike Moustakas’ home run in the 11th inning after beating Oakland in 12 innings in Tuesday’s wild-card game.

“This isn’t a fluke,” said Royals outfielder Alex Gordon. “We’re getting it done. We’re not an uptight ballclub. We leave it on the field every night.”

How rare is their run? The Royals are the first team ever to start the playoffs with three straight wins in extra innings, and the first ever to play three postseason games in a row of 11 innings or more.

Hosmer’s homer to right came off Kevin Jepsen (0-1) after Lorenzo Cain hit a single, giving the Royals a 3-1 lead. Salvador Perez added an RBI single off Vinnie Pestano and Greg Holland stranded a runner in the bottom of the inning for the save.

“I just knew I got a good swing on it and it felt good,” Hosmer said. “These games have been back-and-forth the whole playoffs for us so it’s a huge sigh of relief.”

Albert Pujols had an RBI single in the sixth inning to tie the score for the Angels, but probable AL MVP Mike Trout remained hitless in his first two postseason games.

“It’s tough,” said Trout. “We’re having good at-bats, we’re just missing pitches. They have a good staff over there but we can’t hang our heads.”

Pujols’ single was just one of five hits given up by Royals rookie Yordano Ventura, who was still reaching 100 mph on his fastball in his final inning, the seventh.

The 23-year-old struck out five and walked one against the AL West champions, who were baseball’s best team in the regular season.

Angels starter Matt Shoemaker, a 28-year-old rookie, had six strikeouts and no walks while giving up a run on five hits in six innings.

The Angels ran themselves out of a potential go-ahead run in the eighth inning when pinch-runner Collin Cowgill was thrown out at third base trying to move up on Chris Iannetta’s fly ball to center field.

Jarrod Dyson, in as a defensive replacement, one-hopped the throw to the foul side of the bag and Moustakas spun to make the tag in time.

Brandon Finnegan (1-0) walked David Freese in the bottom of the 10th but former AL MVP Josh Hamilton grounded into a double play to end the inning.

“There are some guys right now who aren’t attacking the ball the way they can for various reasons,” Angels manager Mike Scioscia said. “There isn’t one cure-all that’s going to get everyone to swing the bat.”

Hosmer had three hits and scored two runs. He hit a leadoff single in the second inning and went to second base after right fielder Kole Calhoun misplayed the ball. Hosmer scored on Gordon’s one-out single up the middle to give the Royals a 1-0 lead.

Freese grounded into a double play to kill a potential Angels rally after Howie Kendrick and Erick Aybar hit consecutive singles to start the fifth inning.

The Angels finally broke through in the sixth when Calhoun stroked a two-out single, went to second on Trout’s walk and scored when Pujols went the other way to right field on an outside fastball for an RBI single.