You are here: Home / Sports / Total domination as Jamaal Charles returns and finds the end zone three times, Tom Brady picked off twice as Chiefs blow out the Patriots 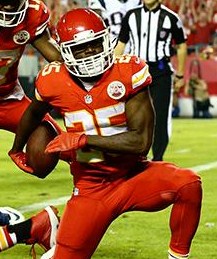 Jamaah Charles reaches the endzone against the Patriots (photo/KCChiefs.com)

Jamaal Charles returned from his high ankle sprain to score three touchdowns as the Chiefs blowout New England 41-14.  Charles only missed one week, as he ran for 92 yards and a score. He also brought in two short touchdown passes from Alex Smith, who had 248 yards passing and three touchdowns.

The Chiefs (2-2) ended a four-game losing streak at Arrowhead Stadium and handed the Patriots their worst defeat since losing to San Diego 41-17 in 2005.

Tom Brady continued to struggle in 2014 as he threw two interceptions, one returned for a touchdown.  Husain Abdullah took it 39 yards for a touchdown.Tamba Hali also stripped the ball from Brady which set up a field goal. Brady finished 14 of 23 for 159 yards.

Charles gave the Chiefs an early lead with his first-quarter touchdown and extended the lead with a 5-yard TD catch in the second quarter.  Cairo Santos added a 22-yard field goal just before halftime for a 17-0 lead.

Kansas City had 303 yards of first-half offense, the most against any Belichick-coached team.

Charles added his third touchdown of the game early in the second half, taking a short pass before stumbling into the end zone. He appeared to grab the back of his leg and didn’t play much after that, but the game was well in hand.

So much for Seattle’s 12th man.  KC has the record again, when Guinness World Records recorded a noise level of 142.2 decibels — breaking the mark of 137.6 that the Seahawks’ fans had set last season.