A broadcast media association is asking the Attorney General’s Office to investigate “exorbitant fees” being charged by the City of Ferguson for copies of records relating to the shooting of Michael Brown by a Ferguson police officer.

The Radio, Television, Digital News Association cites reports that some news media have been told fulfilling their requests would cost unspecified “thousands of dollars” for copies of documents. RTDNA accuses the City of Ferguson of “apparent contempt for the media-something so graphically demonstrated on the streets of Ferguson during the nights following the shooting.”

According to the Attorney General’s Office, government agencies can charge, “up to 10 cents per page for standard paper copies, the average hourly rate of pay for clerical staff to duplicate documents, and the actual cost of the research time for fulfilling the request.” State law also requires a governmental body to use, “the lowest salaried employees capable of searching, researching, and copying the records. Fees for accessing records on other media, or non-standard paper copies, shall reflect actual cost involved.” 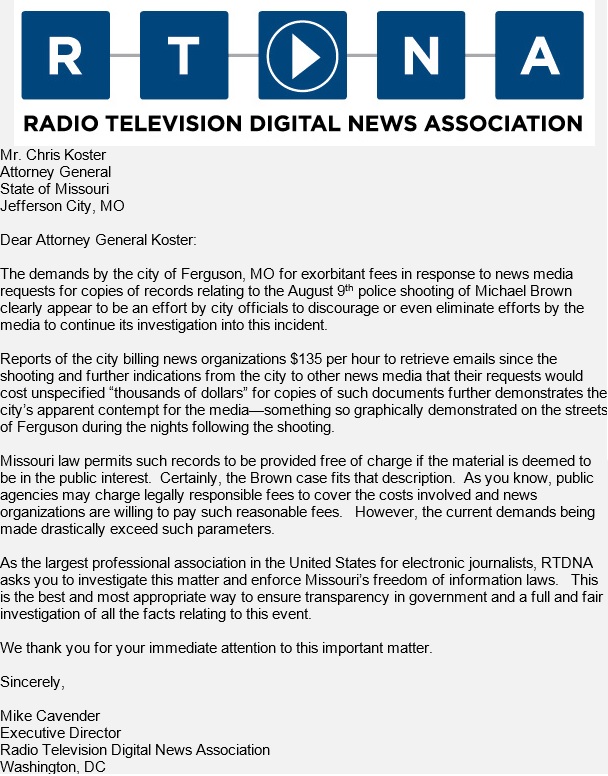 Previous Post: « Tests show Jovan Belcher was likely suffering from Chronic Traumatic Encephalopathy. Test performed at the request of his daughter’s lawyers
Next Post: Shane Ray returns as SEC defensive line player of the Week. Second time this season the junior has been honored. »