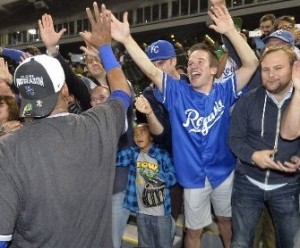 The Kansas City Royals will host the 2014 American League Wild Card game Tuesday night at Kauffman Stadium with first pitch scheduled for 7:07 p.m. CT against either the Oakland Athletics or the Seattle Mariners. Gates will open to fans at 5 p.m. The game will be televised nationally on TBS.

The Royals are hosting a “Take the Crown Rally” on Monday that will allow fans and players to come together to celebrate the club’s first Postseason appearance in 29 years. The event is free to the public and will begin at 11:30 a.m.

To wrap up the event, fans can watch the Royals take batting practice in preparation for their Wild Card tilt the following day at Kauffman Stadium.

Gates to the ballpark will open at 10:45 a.m. Fans are asked to enter the Truman Sports Complex via Gate 2 or the Bus Exit located near Gate 6 and will be directed to park in Lot J.

The Royals are asking fans to exit the Truman Sports Complex via the Bus Exit near Gate 6 promptly at 1:30 p.m. following the rally in order for the Kansas City Chiefs to prepare for their Monday Night Football game against the New England Patriots. “Take the Crown Rally” attendees with tickets to the Chiefs game will need to leave the parking lots after the rally and re-enter the parking lots when the Truman Sports Complex opens again at 3 p.m. for the Chiefs game.