You are here: Home / Sports / Yordano Ventura stellar as Royals top Tribe and inch closer to a playoff spot 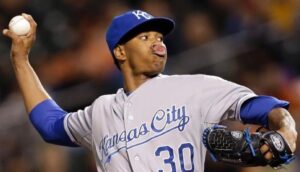 Yordano Ventura tossed seven scoreless innings and got plenty of run support in the Kansas City Royals’ 7-1 win over the Cleveland Indians on Tuesday.

Ventura (14-10) limited the Tribe to just eight baserunners — four hits and four walks — while striking out six over his career-high 117-pitch outing.

Omar Infante, Salvador Perez and Alex Gordon all drove in two runs for the Royals.

Kansas City still trails Detroit, which defeated the White Sox on Tuesday , by one game in the AL Central. It did, however, move three games ahead of Seattle for the American League’s second wild card position.

“Again, the wild card has always been Plan B,” said Royals manager Ned Yost. “We’re in good shape right now. Our focus is winning this division.”

Danny Salazar (6-8) was charged with five runs on eight hits and struck out eight over 4 2/3 innings in the loss.

“He came out of the chute working ahead, then all of a sudden he started throwing pitches up. It was almost like two different pitchers,” Cleveland manager Terry Francona said of Salazar.

The Indians were eliminated from the AL Central with Detroit’s win and now trail KC by 4 1/2 games in the wild card race.

The finale of this three-game set is Wednesday, then the Royals end the season with a four-game series against Chicago and Cleveland wraps up the year with three at home against Tampa Bay.

There were 10 total strikeouts between the two teams over the first three innings — six from Salazar and four by Ventura.

Kansas City finally broke the stalemate with a two-run fourth. Billy Butler walked to lead off the inning and Gordon followed with a single to right. After a Perez popout, Infante pulled a double into the left-field corner for a 2-0 lead.

The Royals then added three runs in the fifth with some clutch two-out hitting. Nori Aoki’s lineout to left and Lorenzo Cain’s strikeout proceeded Eric Hosmer’s double to right. Butler then lifted a ground-rule double to a similar spot as Hosmer’s hit for a 3-0 edge. Gordon was intentionally walked to put give the fielders a chance at a forceout, but Perez sent a two-run double into left-center to give the visitors a five-run cushion.

Ventura had retired 12 straight batters until Lonnie Chisenhall sent a single into left with two outs in the fifth. Mike Aviles drew a walk in the next at- bat, but Cleveland couldn’t cash in as Michael Bourn grounded out to first to end the inning.

Kansas City continued to generate offense in the seventh with Gordon’s two-run double making it a 7-0 game.

The Indians loaded the bases with two outs in the home seventh, but Ventura worked out of his biggest jam of the night, striking out Jose Ramirez to keep them off the board.

With runners on the corners and no outs in the home eighth, David Murphy grounded into a double play as pinch-runner J.B. Schuck crossed home for Cleveland’s lone run.