Not only was Austin Davis the tough luck quarterback in the Rams 34-31 loss to the Dallas Cowboys, but then he got shoved by tight end Jared Cook on the sidelines…after Cook dropped an easy one-yard touchdown.  Davis to his credit, didn’t make much out of the sideline shove.

Cook addressed the situation after the game and even apologized to Davis and his teammates on Twitter.  Cameras caught Cook shoving quarterback Austin Davis and getting confronted by his teammates.

Cook said that Davis was just coming over to give him a pep talk after he dropped the ball, but Cook said he just wanted to be left alone.

A touchdown would’ve given the Rams a 28-20 lead with 13 minutes 28 seconds to play. Instead, they settled for a Greg Zuerlein field goal and a 24-20 advantage. 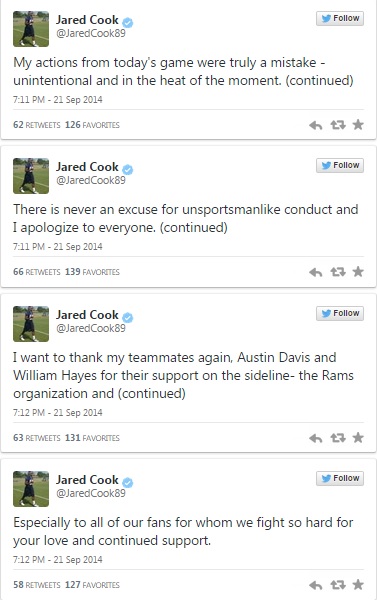