You are here: Home / Sports / Mizzou’s Morse, “This is our ‘come to Jesus’ week.” Team captain guarantees best week of practice coming up for South Carolina (VIDEO) 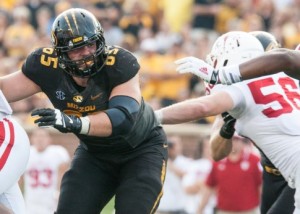 Mitch Morse was part of an offensive line that had five false start penalties, and gave up 11 tackles behind the line of scrimmage (photo/Mizzou Athletics)

When the Missouri Tigers gain close to 500 yards, like they did against Indiana on Saturday at Faurot Field, (498 to be exact), they’re going to win the football game.  That would have been the consensus coming into week four.  Yet, it didn’t happen.  The Tigers find themselves on the short end of a 31-27 final for their first loss of the season.

As the Tigers get ready for SEC play next week at South Carolina, this Indiana game will be looked at as either the spring board that bounced Missouri’s season into the right direction or the turning point.  If Mizzou suffers a second loss in a row, who knows what happens to the confidence and unity of this team.

Offensive guard and team captain Mitch Morse knew the stakes were high moments after this defeat.

“This is our coming to Jesus week guys.  I promise you this is going to be the best week of practice we’ve ever had.”

Watch our post game wrap with comments from the players.