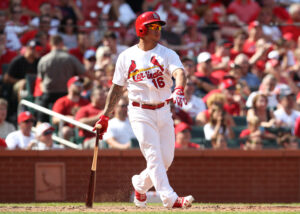 Matt Holliday had the go-ahead hit, an RBI single in the seventh inning after Kolten Wong’s two-run, pinch-hit homer tied the game, giving the Cardinals 5-4 win over the Pittsburgh Pirates on Monday.The Cardinals are one game ahead of Milwaukee, which lost to the Chicago Cubs. Pittsburgh is three games back.

This is the first time this season the Cardinals moved into first place.

Wong, who was ruled to not have a concussion after banging his head on Sunday,  homered off Pittsburgh starter Gerrit Cole (7-5) to tie the score.  Jon Jay followed with a triple and scored on Holliday’s single to left. Holliday also had a two-run double in the third.  He is 7 for 11 with three home runs and 12 RBIs in the last three games.