Missouri’s Governor has cancelled his appearances at the State Fair in Sedalia and instead will be in North St. Louis on Thursday where violence continues after the shooting death of 18-year-old Michael Brown by a Ferguson police officer on Saturday.

Governor Jay Nixon (D) delivered remarks to community leaders on Tuesday and on Monday had requested an independent federal investigation of the shooting, but on Wednesday night was the subject of a barrage of criticism on social media for what critics called a lack of leadership.

Messages calling for Nixon to act were interspersed among reports of tear gas, rubber bullets and ear-piercing audio being used to disperse protesters, and that two reporters had been arrested while others were ordered by police to quit shooting video of protest scenes.

Critics, some of them political editorial writers and some others current or former politicians from both parties, accused Nixon of not showing the same leadership he had been credited with after Joplin was devastated by an EF-5 tornado in May, 2011. Others questioned whether a perceived lack of action could be a detriment to Nixon’s political future, which some have predicted could include a cabinet position or vice presidential bid.

Many seized upon Nixon’s last tweet before the situation in the St. Louis region escalated, that referred to his continuing effort to drum up support throughout the state for his vetoes of a series of bills to change Missouri tax policy. 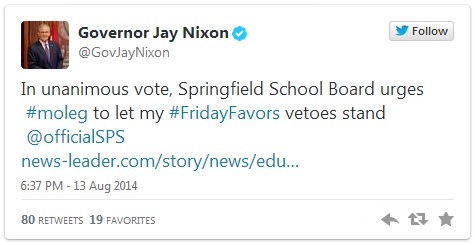 Critics claimed it was evidence of misplaced priorities.

Nixon’s office appeared to respond to the criticism by tweeting that he would not be at the Governor’s Ham Breakfast, a staple of the Fair schedule, as well as other events and appearances scheduled for Thursday in Sedalia.

“The worsening situation in Ferguson is deeply troubling, and does not represent who we are as Missourians or as Americans. While we all respect the solemn responsibility of our law enforcement officers to protect the public, we must also safeguard the rights of Missourians to peaceably assemble and the rights of the press to report on matters of public concern.

“I have been closely monitoring the situation and will continue to be in communication with local leaders, and I will be in north St. Louis County tomorrow. As Governor, I am committed to ensuring the pain of last weekend’s tragedy does not continue to be compounded by this ongoing crisis. Once again, I ask that members of the community demonstrate patience and calm while the investigation continues, and I urge law enforcement agencies to keep the peace and respect the rights of residents and the press during this difficult time.”

Previous Post: « From the State Fair: 4-H kids show off their skills proving there is something for everyone (VIDEO)
Next Post: Concussion will end the football career for a Missouri State tight end. “I’m trying to make a smart decision for my future.” »