You are here: Home / Sports / Guthrie goes the distance retiring the final 19 batters in a row as the Royals sweep the D-Backs in the desert. 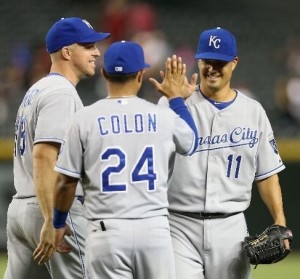 Jeremy Guthrie is congratulated by teammates after pitching a complete game. (photo/MLB)

Jeremy Guthrie retired the final 19 batters as the Royals beat Arizona 6-2 for a three-game sweep of the Diamondbacks.  Guthrie (8-9) allowed seven hits, struck out four and walked none in his eighth career complete game.  The win pulls the Royals to within 2.5 games of division leading Detroit and into the second Wild Card spot by a half game over the Yankees, Toronto and Seattle.

Alex Gordon hit a two-run homer and Alcides Escobar had a two-run single for the Royals, who have won four in a row and 12 of 15. The Royals are now 60-53 and have moved seven games above .500, matching its season high after going  5-1 on this western trip to Oakland and Arizona.  The Royals have been an impressive 33-26 on the road this season and have won five straight series.

The Royals have a tough task ahead of them, hosting San Francisco this weekend.