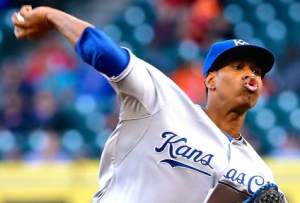 Mike Moustakas homered and drove in four runs, as the Kansas City Royals took down the Arizona Diamondbacks, 4-3.

Moustakas had two of Kansas City’s five hits, helping the Royals move to 11-3 over their last 14 games and stay within a half-game of the Blue Jays for the final wild card spot in the American League. Toronto took down Baltimore on Wednesday.

Yordano Ventura (9-8) struck out eight, yielding two runs on eight hits to earn the win. The hard-throwing righty improved to 5-2 on the road this season.

“They were swinging the bats really well against Ventura,” said Royals manager Ned Yost. “I mean, Ventura really had to grind it out tonight.”

The Royals passed their 2013 interleague win total, improving to 10-4 against the National League this season. They also won a sixth straight interleague road game.

Lorenzo Cain singled with two outs in the top of the second inning, leading to Moustakas’ two-run shot to right field.

Arizona got the runs back in the home third. Ender Inciarte tripled to right to lead things off, and Hill drove him in two batters later with a single to center. After Trumbo advanced Hill to third and Miguel Montero struck out swinging, Peralta tied the score with a base knock up the middle.

A half-inning later, Moustakas had the Royals back in front. Collmenter struck out the first two batters in the inning before issuing consecutive walks to Alex Gordon and Cain. Moustakas stepped in and delivered the go-ahead single to right.

Billy Butler doubled against Matt Stites in the ninth inning and advanced to third when Cain lined out. After Oliver Perez took over on the mound, Moustakas grounded into what appeared to be an inning-ending double play, but Moustakas dove headfirst into first base. He was initially ruled out, however a video review determined that he beat the throw. Butler scored on the play to make it 4-2.

“The run we gave up in the top of the ninth was a killer,” said Arizona manager Kirk Gibson. “We didn’t execute pitches in that inning, Butler hit the double … and the pitch to Moustakas just wasn’t a good pitch.”

Trumbo hit a sacrifice fly to deep left in the ninth off Greg Holland to cut it to 4-3, but Andy Marte struck out swinging to end it. Holland picked up his 32nd save.