You are here: Home / Sports / Cardinals roll to their third straight win over Pittsburgh, as Lynn picks up his 10th win. Molina leaves with sprained thumb 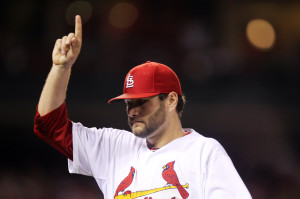 St. Louis Cardinals starting pitcher Lance Lynn acknowledges the crowd as he comes out of the game in the seventh inning against the Pittsburgh Pirates at Busch Stadium in St. Louis on July 9, 2014. UPI/Bill Greenblatt

Kolten Wong homered for the second straight game and Matt Adams had three hits and two RBIs.  The Pirates had won 12 of 15 coming into this series, but dropped the first two games thanks to the right side of the Cardinals infield that delivered game-winning, ninth-inning homers by Adams and Wong.  Matt Holliday had two hits, two walks and an RBI and Jhonny Peralta had an RBI double for St. Louis.

Lynn (10-6) allowed two runs and six hits in 6.2 innings.  His 32 wins before the All-Star break over the last three season is tied with Chesterfield, Mo. native Max Scherzer over that same stretch.  The last Cardinals pitcher to win at least ten games before the break in three straight seasons is Bob Gibson, who won 34 from ’68-’70.

All-Star catcher Yadier Molina sprained his right thumb on a slide and was taken out for a pinch-hitter in the third inning. Molina slid feet-first into third base advancing on a groundout in the second and came up shaking the right hand as it appeared to jam as he put his hand on the ground.  Results of the MRI were not available and the team will re-evaluate the injury on Thursday.