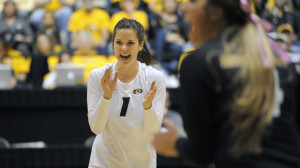 Former Mizzou All-American setter and SEC Player of the Year Molly Kreklow (Delano, Minn.) has been nominated as a finalist for the 2014 NCAA Woman of the Year Award, which will be awarded on Oct. 19 in Indianapolis. The list will be narrowed to 10 Division I candidates later this year and then three finalists in Division I will be selected in September. The NCAA Committee on Women’s Athletics will then vote from among the finalists to determine the 2014 NCAA Woman of the Year.

The Woman of the Year award honors graduating female student-athletes who have distinguished themselves throughout their collegiate careers in academics, athletics, service and leadership.

Kreklow, who was nominated for SEC Athlete of the Year, has been the recipient of several offseason awards after a historic Mizzou volleyball season in 2014. Kreklow was named an AVCA First Team All-American and a Volleyball Magazine First Team All-American in addition to earning SEC Player of the Year status and first team All-SEC honors. She was named Mizzou Female Athlete of the Year by both the St. Louis Post-Dispatch and the Columbia Daily Tribune. Along with teammate Lisa Henning (Blue Springs, Mo.), Kreklow was also honored with a Special Achievement Award from the Missouri Sports Hall of Fame. She has spent her summer setting for the USA Volleyball National Team and is expected to begin her professional career overseas later this year.

The Tiger setter guided Mizzou to an undefeated regular season (34-0) and the school’s first ever SEC Championship after posting a perfect 18-0 league record in 2013. She led the nation in assists and quarterbacked a Mizzou offense that ranked first nationally in hitting, kills, assists and wins. She helped the Tigers reset school records in wins, conference wins, consecutive wins, sweeps and the team’s .356 attack clip was the best in college volleyball since 2009.
Kreklow was also heavily involved in Mizzou new sports psychology and positive coaching program in 2014. The unquestioned team leader was nominated for SEC Athlete of the Year and the SEC Sportsmanship Award in addition to all of her postseason accolades.
Additionally, Kreklow was very active in the Mid-Missouri community. Her involvement included participating in the Mizzou volleyball elementary youth leagues as she taught before-school volleyball classes to local elementary-age children once a week for two months, participating in a free youth clinic to teach volleyball to young children and participating in a Columbia Mall Meet-and-Greet in conjunction with MU Children’s Hospital. Henning continually visited local retirement communities such as Boone Landing and Lenoir Retirement Homes and played with children at Going Bonkers, a local business in Columbia. She helped throw a beach party for local children at Wilson’s Pool and gave children free volleyball lessons at the pool in addition to working with the local area Girl Scouts program.