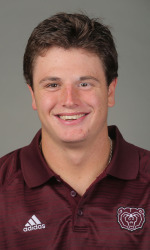 Missouri State outfielder Tate Matheny has earned a roster spot with USA Baseball’s Collegiate National Team, which announced on Monday its 24-man roster that will take part in international competition throughout the month of July.

Arkansas head coach Dave Van Horn and assistant coaches Rob Childress (Texas A&M), Ray Birmingham (New Mexico) and Steve Rodriguez (Pepperdine) will lead the 2014 Collegiate National Team, which opens its series against Chinese Taipei at 7:05 p.m. on July 1 at the National Training Complex in Cary, N.C. The teams will play again on July 2 at Keeter Stadium in Shelby, N.C., on July 3 at BB&T Ballpark in Charlotte, N.C., and on July 4 and 5 at Durham Bulls Athletic Park in Durham, N.C.

Team USA will then host a three-game set against Japan July 6-8 in Thomasville, Wilson and Wilmington, N.C., before traveling to the Netherlands for Honkbal-Haarlem Baseball Week, July 11-20. Following that tournament, the U.S. will head to Cuba for a five-game friendship series, July 23-27.

Remaining with the team as an alternate through its five-game series against Chinese Taipei on July 5 is Bailey Ober (RHP, College of Charleston).

Matheny, who has hit .211 (4-for-19) with three stolen bases in his seven games with Team USA to date, becomes the sixth Bear to be selected for the Collegiate National Team during head coach Keith Guttin’s tenure and the first position player to earn a roster spot since Ryan Howard in 2000. Beginning with Bill Mueller’s selection for the 1991 Collegiate National Team, Jarrod Mays (1995), Bob Zimmermann (2001 and 2002) and Ross Detwiler (2006) have also donned the Red, White and Blue of Team USA during their Missouri State careers.

Matheny captured MSU’s Willis Award as team MVP for the second straight year in 2014 after turning in one of the top all-around performances in the Missouri Valley Conference. The junior-to-be powered the Bears’ offense with a .330 batting mark, while his 10 home runs ranked third in the Valley and marked the first double-digit total for a Missouri State player since 2009.

The St. Louis native has started all 108 games of his Missouri State career, is the Bears’ active leader in home runs (14) and hitting with a .333 career average. A First-Team All-MVC selection this spring, he led all MVC batters with 35 hits in league play and ranked among the conference’s statistical leaders in nearly every significant offensive category during the Valley season.