Republican budget leaders are slamming Governor Jay Nixon (D) for the actions he has taken with the state budget for the fiscal year that begins July 1. They say he is using “inflated” figures to estimate the impact of tax break bills passed on the final day of the session, and playing politics with the state’s children and the disabled in an attempt to force lawmakers not to override his vetoes of those bills. 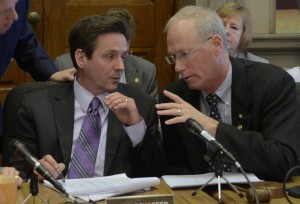 Nixon announced on Tuesday vetoes totaling $144.6-million and restrictions of $641.6-million from the state budget. Coupled with federal and other dollars that results in a reduction of $1.12-billion dollars for state programs, services and employees.

Nixon says the legislature sent him a budget that was more than $786-million out of balance. He says that’s in part because the legislature didn’t account in its budget for the impact of those 10 tax break bills, which he says could rise to $425-million in lost state revenue.

“We looked at all the fiscal notes (on those bills) and (Nixon) took the high position on all those fiscal notes,” says Stream, “so we disagree with him on those estimates.”

Nixon’s is restricting proposed increases of more than $100-million for K-12 public schools and $43-million for colleges and universities, and says he could release those funds if the legislature doesn’t overturn his vetoes of those ten bills.

“He inflates the numbers,” says Schaefer of Nixon’s assessment of those bills, “to really hold school kids, kids with autism, mental health services, other things, hostage in order for Missourians to not get a tax break.”

Both budget directors say withholds have been anticipated because state tax revenues are behind last year’s, and behind the projections both Nixon and the legislature used in proposing the new budget.

“We budgeted to a number that we thought we were going to grow to and it just didn’t happen in the six months that we’ve had to look at it,” says Stream.

Schaefer says Nixon has exacerbated the revenue shortage by not having a plan for economic development.

“The only economic development plan this governor has had for six years is expand welfare and take Obama dollars,” says Schaefer.

AUDIO:  Schaefer criticizes Gov. Nixon, accusing him of having no plan for economic development

Nixon says the legislature’s inaction on expansion of Medicaid eligibility, that could draw more federal dollars, is making the state’s economic situation worse.

Nixon also blames the need for his actions in part on the legislature basing its budget on the passage of tax amnesty legislation. Schaefer says the budget didn’t assume the passage of that legislation, which has been offered but hasn’t achieved passage for several sessions.