You are here: Home / Sports / Several Special Olympians from Missouri medal after full day of events at USA Games in New Jersey 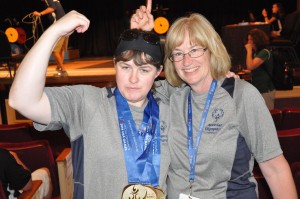 On Tuesday, each of our teams representing Missouri competed, with many receiving medals at the 2014 USA Games in New Jersey. Here is a breakdown of some of the highlights provided by Special Olympics, Missouri.

Eric Wright won gold in the 50 meter run. Officially he was the first medal of the  for Team Missouri.

Powerlifters Dary McIntyre and Brianne Chavez had an absolutely phenomenal day of competition according to coach Ed Blaylock. Brianne just totally dominated everyone in the female division and probably could have outlifted most of the men. She set a personal record by squatting 330 lbs. and probably could have done 350 easily if given the chance she was that on it today. She then benched 165 lbs. and deadlifted 358, which gave her a total of 854 lbs. on the day. All of those lifts won her a gold medal and was obviously good enough for the overall gold medal in the combination as well (four gold medals in total).

Today was the finals day of singles competition in which the guys did really well. Michael Lunceford bowled a 160 and his average is a 91, and he finished with the gold medal in his division! Chris Miller was in a really tough group and bowled a 208 in one of his games.

The volleyball team had preliminary matches again Colorado and Pennsylvania on Tuesday. In the morning session, Team Missouri won both games (in three sets against Pennsylvania and two against Colorado). In the afternoon, they beat Pennsylvania again (this time in two sets), but lost to Colorado in three really, really close sets. They are adding another team to their division tomorrow in New Jersey. They are set to play at 11 a.m., 1 p.m. and 3 p.m. on Wednesday.