Missouri’s only commercial nuclear reactor is replacing a key part that has been in service since the plant went into operation almost thirty years ago. The Nuclear Reactor Vessell Head will be 42 feet tall and weighs 288,000 pounds when installed at Ameren’s Callaway Nuclear Power Plant. It costs $145 million but Senior nuclear operations director Barry Cox says it will extend the life of the plant to 2024 and beyond–if the government re-licenses the plant that year.

“It houses our control rod drive mechanisms, some supporting equipment for that, cabling, control rod drive fans (and) things of that nature,” he says.   The old mechanism will be stored with other radioactive waste at the reactor site. 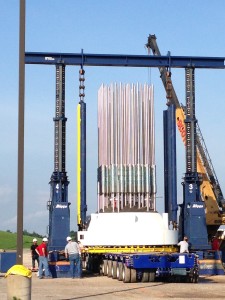 Cox says the new equipment will be installed later this year when the plant shuts down for routine refueling.

The new vessel head was made in Spain then shipped by barge up the Mississippi and Missouri Rivers to the Callaway plant’s port near the central Missouri town of Reform.