You are here: Home / Sports / Garcia leaves after seven with the lead, but Cardinals fail to close out the Giants who rally in the eighth 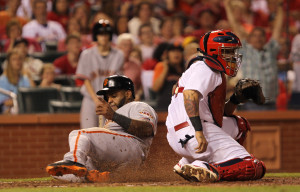 San Francisco’s Michael Morse hit a two-run double off Trevor Rosenthal, who was called upon in the eighth inning of a tie ball game, to put the Giants on top for an eventual 6-5 win Thursday night at Busch Stadium.

Carlos Martinez came on to pitch the eighth inning to hold a one-run lead for Jaime Garcia, but a defensive lapse helped lead to a three-run inning for the Giants.

Gregor Blanco scored from second on Angel Pagan’s singled to center to tie the score at 4-4.  Blanco was held up at third as the strong throw from Peter Bourjas in center came in, but the ball hit the front side of the mound and got past three Cardinals, including Martinez  who screened catcher Yadier Molina by not getting behind the plate in time to back up the throw.

Martinez stopped when Blanco stopped at third, but then missed the ball as he reached for the throw.  Molina couldn’t see the throw came through.

Pagan moved up to second. Trevor Rosenthal came in after Martinez intentionally walked Pablo Sandoval, and Michael Morse doubled past Bourjos to drive in Pagan and Sandoval and give the Giants a 6-4 lead.

Sergio Romo gave up a run on Matt Carpenter’s two-out single, but held on for his 17th save in 19 chances.

Cardinals starter Jaime Garcia went seven innings, giving up three runs on five hits. He struck out seven and has yet to issue a walk this season. He was in line for the victory after Allen Craig hit his sixth homer of the season and second in three games off  Giants starter Ryan Vogelsong in the sixth.