You are here: Home / Sports / Swept by the ‘Stros. Royals bats continue to fizzle as Houston launches three long balls in finale win 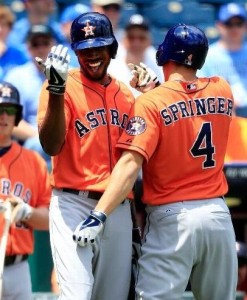 Houston’s young team displayed the type of fire power they are capable of producing and increased their winning streak to five games after sweeping the Royals on Wednesday afternoon in a 9-3 final at Kauffman Stadium.

Chris Carter connected for two home runs, and George Springer set a rookie club record for homers in a month, with his ninth.  That came in the first off  Royals starting pitcher Danny Duffy, who was roughed up, allowing six runs on seven hits and five walks in four-plus innings. The first four Royals pitchers combined to walk 10, which was a season high.

Carter, who had been benched with a .192 batting average, homered to lead off the fifth. He hit a three-run homer in sixth off reliever Louis Coleman for his fourth career multihomer game and his first this season.

The Astros outscored the Royals 21-5 in the series.