You are here: Home / Sports / Royals hard throwing rookie Ventura exits in third inning with elbow issues in a blowout loss to Houston 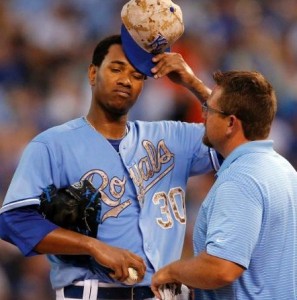 Yordano Ventura is met by a team trainer in the third inning. (photo/MLB)

“I’m not concerned it’s a ligament injury,” Royals manager Ned Yost said after Monday’s 9-2 loss to the Houston Astros. “The trainers were right on it, and they came two minutes later and said it’s the outside of the elbow, and that’s where my concern dropped way off.”

When pitchers are faced with the outlook of Tommy John surgery, the pain is usually on the inside part of the arm and below the elbow.  While this is still a serious issue to contend with, the Royals are cautiously optimistic.

Yost went out to the mound in the third inning to visit with his rookie starting pitcher Yordano Ventura who was laboring through his start.  With a 1-2 count on Jose Altuve, Ventura was pulled from the game.

The Astros got on him with five runs in the first two innings on five hits and three walks.