You are here: Home / Sports / For the seventh time overall, and the first time since 2009, the Lincoln women’s outdoor track & field team is the national champion. 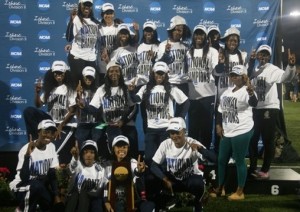 Starting in the 4 x 100m relay, where the foursome of Judith Riley, Kimberly Bailey, Yanique Ellington and Janae Johnson won in 45.34. Ellington and Johnson would go on to earn three total All-American honors, given to any athlete who finishes in the top-eight on an event at the national championships. Johnson was the runner-up in the 200m, clocking in at 23.49, and took fifth in the 100m in 11.87. Ellington, meanwhile, placed third in the 100m (11.75) and fourth in the 200m (23.49).

The day ended with the 4 x 400m relay. Entering that event, Lincoln had 54 team points and was in first place by just one point. Johnson C. Smith was in second with 53 points, and the two teams were going head-to-head in the relay with everything on the line. The Lincoln foursome of Willomena Williams, Jhevere Hall, Donna-Lee Hylton and Tamara Keane stepped up, winning the race in 3:37.29 to guarantee the Blue Tigers the national championship.

Keane also earned All-American recognition in three events, including the 400m hurdles, in which she placed fourth with a time of 59.56. Keane finished seventh in the 400m dash, timing in at 54.22, while Hylton placed eighth in the latter event with a time of 54.91.

Hall was also a multiple All-American honoree, as she placed sixth in the 800m in 2:09.35. Monique Thompson had the best performance by a Blue Tiger in that event, claiming fourth after posting a time of 2:08.76. Lincoln’s final All-American award winner was Ladonna Richards, who took fourth in the 100m hurdles with a time of 13.32.