A Missouri program that puts dogs in prisons could soon be going international.

Representatives of the United Kingdom’s most famous animal rescue operation have spent a week visiting Missouri men’s and women’s prisons, learning how the “Puppies for Parole” program is changing dogs and inmates.

The Corrections Department started the program four years ago and it has spread throughout the prison system. Chief Executive Claire Horton with the Battersea Dogs and Cats Home in London has talked to fifty to sixty inmates and calls the conversations “fascinating.” She says the program has taught the inmate to think about someone other than themselves, how to care and to love, to communicate and other life skills that have been missing in their lives. 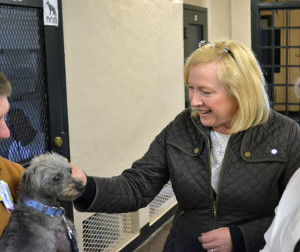 And the dogs, she says, gets a person who loves them, which is the first thing dogs want. Horton says they also learn basic commands of behavior that will make them good pets and some learn disciplines they’ll use to become service dogs.

She says one lifer told her he knows he will never get out of prison, but feels that every time one of his dogs leaves, a little bit of him leaves prison, too.

Horton says some London officials already are interested in a pilot project in the United Kingdom.

Previous Post: « Make that a “Black and Gold” Friday. Mizzou football will play Arkansas at home the day after Thanksgiving.
Next Post: St. Louis selected to host the 2018 SEC men’s basketball tournament »