Six luxury sedans have glided quietly to a stop on the driveway around the south front of the Capitol, driven from St. Louis without burning a sip of gasoline. 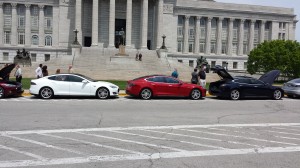 Their owners and representatives of the Tesla  company are in Jefferson City because the state senate has inserted language into a bill regulating all-terrain vehicles that would bar Tesla from making direct sales to Missourians.  Tesla does not have dealerships. 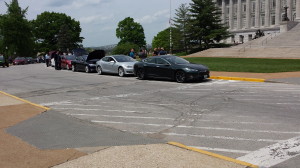 Tesla calls the insertion of the language into the ATV bill a “sneak attack” by the Missouri Auto Dealers Association.    The bill, previously passed by the House without the language, has been sent back to the House by the Senate for final approval in the last days of the legislative session. The change was not discussed in the Senate.

Jefferson City Senator Mike Kehoe is seen as a prime mover in that effort.  Kehoe is the former owner of a Ford dealership. He says Tesla’s opening of a sales operation in St. Louis  is “clearly designed to circumvent the traditional franchise model” for vehicle sales.

Tesla does not maintain dealerships.  It says it has invested two million dollars sin its facility in St. Louis and plans to open another one in Kansas City soon.  The company says it has sold 130 cars in Missouri and several more have been reserved by Missourians. 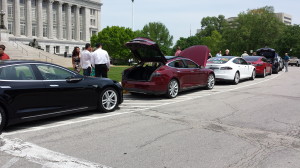 Two influential members of the House say they will oppose the change to the bill.  Rep. Stanley Cox (R-Sedalia) and Chris Kelly (D-Columbia) say the effort would “stifle competition in the Missouri economy by forcing technology manufacturers like Tesla to go through a middleman to bring their innovative products to market. The bipartisan pair of experienced lawmakers believe the shortsighted measure would make it more difficult for Missouri to attract to new business and industries.”

Previous Post: « Central Missouri announces the retirement of baseball coach Tom Myers who plans to pursue other opportunities after seven seasons with the Mules
Next Post: No action Monday on language that would block Tesla sales in Missouri »