You are here: Home / Sports / Drury baseball wins the Great Lakes Valley championship and heads to Evansville for NCAA Regionals 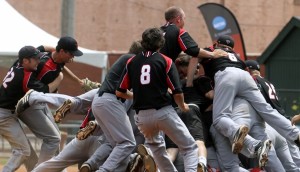 The Panthers are headed to Evansville this coming week for NCAA-II Midwest Regional play. The Panthers are the No. 3 seed and will face No. 4 seed Wayne State (35-15) from the GLIAC in Thursday’s first round at a time TBA. Southern Indiana is the host and No. 1 seed, followed by Grand Valley State, Drury, Wayne State, Lake Erie and Indianapolis as the six teams will battle it out to try to reach the College World Series May 24-31 in Cary, NC.