You are here: Home / Sports / Shelby Miller gets his first career win against Pirates who drop their seventh game in nine tries 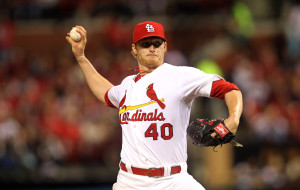 Shelby Miller went 5.2 scoreless innings to lead the Cardinals to a 1-0 win over Pittsburgh Friday night. Miller (2-2) entered the game with an 0-5 record and a 5.93 ERA against the Pirates. He allowed just three hits and four walks while striking out four.

Pat Neshek, Kevin Siegrist, Carlos Martinez and Trevor Rosenthal preserved the shutout. Rosenthal struck out the side in the ninth for his seventh save in seven chances.

Matt Holliday had three hits, a walk and drove in the only run with a first-inning double. Cardinals catcher Yadier Molina singled in the eighth inning to extend his hitting streak to 15 games, matching his career high set in 2007.