Tours of Missouri’s 178-year-old state penitentiary resume today as work continues to save its oldest buildings. 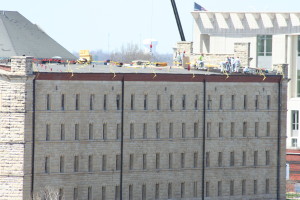 Crews are seen working on the roof of A-Hall or Housing Unit 4, which dates back to 1868 and is the oldest building still standing at the Missouri State Penitentiary. (Photo courtesy, Missouri Office of Administration)

The state and the City of Jefferson are splitting up to $2-million of the cost of mold remediation and roof repair in four buildings at the Missouri State Penitentiary in Jefferson City. Buildings dating as far back as 1868 had been going without major maintenance since the prison was decommissioned in 2004.

Mark Schreiber spent 42 years working for the Department of Corrections, much of it inside “the Walls,” where he developed a passion for its history. He has advocated for years to see those buildings saved and credits the state for setting this in motion.

“It’s very pleasing to see the progress that’s been made,” says Schreiber. “It’s the difference between night and day already, and to see that we’re moving forward and getting something done with the roofs, seeing that they’re doing something with the condition of the interiors of the buildings and how they’re sealing them and preserving them, it’s just really great.”

Crews are putting roofs on and remediating mold in three cell blocks that once held inmates like Charles Arthur “Pretty Boy” Floyd, James Earl Ray and Sonny Liston, and the gas chamber where 39 men and 1 woman were executed between 1938 and 1989.

Tours of the prison were suspended in September due to concerns about mold in some of those buildings. Director of the Jefferson City Convention and Visitors’ Bureau Diane Gillespie says she’s excited to see those tours resume, though for the first couple of months of the tour season the route will be “modified.” 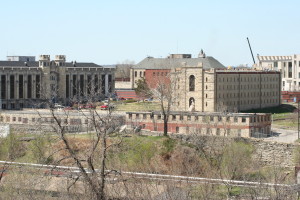 Three of the four buildings that are being worked on are seen in this wide shot: Housing Unit 3 or McClung Hall at left, the four-story Housing Unit 4 or A-Hall to the right and Housing Unit 1 behind A-Hall. (Photo courtesy, Missouri Office of Administration)

She tells Missourinet the full tours and a full offering will open up after July 1.

“We’re filling up actually for August, September and October for the ghost tours,” Gillespie tells Missourinet. “At that time we’ll have full access to all four of the buildings, and actually we’ll be able to have maybe a little bit more access to some of the buildings than what we’ve had in the past.”

Schreiber, always the historian, notes there is a significant difference between the people working on those buildings now and those that would have worked on them during much of the prison’s use.

“Instead of the contractors that we have now it would have been inmates … offenders, which would have been called convicts back then,” says Schreiber. “We know that from even back in the 1920s when the roof burned off of A-Hall … we’ve got photographs that show the inmates putting the roof back on.”