A proposed constitutional amendment to set an early voting period has passed the House with bipartisan support, despite some Democrats decrying the measure as a “sham” and misleading to voters. 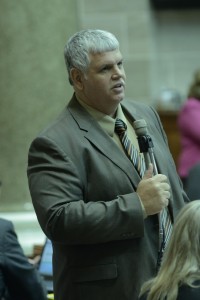 It would allow nine days of early voting excluding Sundays ending the week before federal and state elections beginning with the 2016 General Election.

Representative Stacey Newman (D-St. Louis) asks if the bill is only meant to be a counter proposal by Republicans to an initiative petition that if passed would allow early voting for six weeks and require accommodation of voters on Saturday and Sunday for three weeks before federal or state elections.

“The question that pops in my mind is why is the most popular day of voting across the country … a Sunday, why is that purposely excluded in this amendment?” Newman asks. “The very day that men and women of every stripe, of every profession, the day that most working voters have off.”

“I’m telling you beware,” Newman says, “this is political attempt once again to convince us that the majority party here actually cares about increasing access to voters.”

Of the claim that his legislation is a “sham,” Representative Tony Dugger (R-Hartville) says, “I don’t think so. I mean, it’s clear what I’m doing.”

Dugger says Sundays during the early voting window were exempted to preserve it as a day off for those who would have to work if early voting continued on that day.

“Sunday is basically a day for families to get together. A lot of people attend church on Sunday, get together for lunch,” Dugger tells Missourinet. “We would literally be forcing thousands of people to go to work on Sunday because you’re going to have to have the Secretary of State’s Office open, you’re going to have to have every election authority’s office open in the state plus every [early voting] center.”

The proposed amendment was passed 126-24. It moves on ot to the Senate.