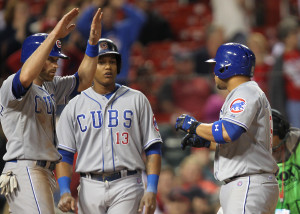 Chicago Cubs Wellington Castillo (R) is welcomed at home plate by Nate Schierholtz and Starlin Castro after hitting a three run home run in the 11th inning against the St. Louis Cardinals at Busch Stadium in St. Louis on April 11 2014. Chicago won the game 6-3. UPI/Bill Greenblatt

The Cardinals rallied from down 3-1 in the ninth and tied it with two runs, then had runners on first and second with two outs in the 10th and manager Mike Matheny let Trevor Rosenthal bat. He took a called third strike, went out to pitch the 11th and Wellington Castillo hit a three-run homer off the Cardinals closer, and the Cubs beat the Cardinals 6-3 on Friday night.

“Trevor had a very efficient inning, throwing six pitches the previous inning,” Matheny said. “He’s arguably our best guy in the pen. We had an opportunity to get him back out there and start off the next inning with Bourjos, Descalso and then the top of the order, we like throwing our best guy out there and thinking it’s going to get us a zero to get us a chance to get back in.”

Matheny opted to call back Pete Kozma. Coming into Friday night, the
Royals had won seven straight games at Target Field and the Twins had lost nine in a row at home dating back to last September. That ended with former Mizzou star pitcher Kyle Gibson pitching into the seventh to improve to 2-0 as the Twins bombed out the Royals 10-1. Starter Bruce Chen allowed seven hits and six earned runs in 3.2 innings, and only 48 of his 87 pitches were strikes.