You are here: Home / Sports / Reds finally get to Wacha, but it’s too little, too late, as Cardinals grab a home opener win for first time in four years 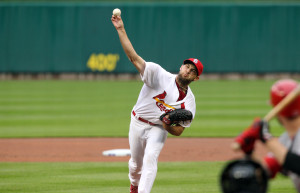 Michael Wacha went 21 innings against the Reds without giving up a run, before back-to-back doubles by Brayan Pena and Roger Bernadina in the fifth to cut the Cardinals’ lead to 3-1. That was all Wacha gave up as both teams tacked on two more runs in a 5-3 Cardinals home opener victory in front of 47,492, the largest crowd at Busch Stadium.

The victory snapped a three-game home opener losing streak for the Cardinals.

The Cardinals ralliled with three hits and a walk in the first five hitters to take the early 3-0 lead against Tony Cingrani, who, in the second game of the season, allowed only two hits in seven scoreless innings against the Cardinals.

Yadier Molina cleared the bases with a double in the first and the club tacked on insurance with RBI singles from Matt Holliday and Allen Craig in the seventh to make it a 5-1 game. Peter Bourjos got his first two hits of the season after an 0-for-13 start and scored on Holliday’s hit. Craig got his third hit and third RBI of the season after entering the game just 2 for 22.

Trevor Rosenthal started the ninth by walking two and giving up two singles. He gave up the final two runs in a non-save situation.