A former Miss America hopes this is the year Missouri passes legislation to require health insurance plans to cover the diagnosis and treatment of eating disorders. 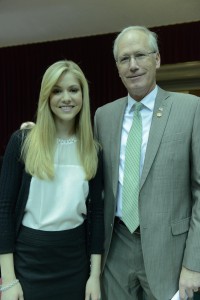 Senate legislation on the issue is awaiting attention by the full chamber, while a House bill has been heard by a committee that hasn’t voted on it.

Haglund told lawmakers at the Capitol that she, herself survived a struggle with an eating disorder.

“The reason I’m here is to say that treatment works and we need to be able to offer people the full spectrum of care covered by insurance because the costs to treat eating disorders can just devastate families.”

Haglund says there is a wide gap between what treatment for eating disorders is covered and what is not.

“They’ll cover like 5 days of care or 7 days of care and then [their insurance company drops] coverage, or a girl or guy will get to 85- or 90-percent of their ideal body weight and then they drop coverage,” says Haglund. “You put that person back out into real life and you’ve only treated the body. You haven’t treated the mental component, the psychological component. That’s where the real problem lies and a lot of insurers want to get out of full coverage.”