One week to live. Jeffrey Ferguson says he’s been moved into solitary confinement, “the hole,” and expects to be transferred from the prison in Potosi to Bonne Terre on Friday. 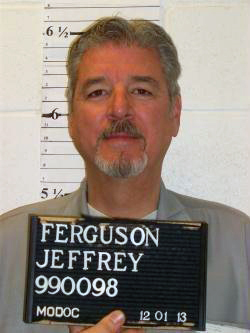 Though he’s been cut off from the rest of the prison population and his friends there, he maintains contact with his loved ones on the outside.

“My two brothers and brothers wife and my children and grandchildren and my friends, a whole network of people,” he said. “A lot of people have been calling and sending letters.”

Including letters, he said, from other victims’ families. Those who “want to know about forgiveness.”

Ferguson says he was blacked out on alcohol and cocaine when 17-year-old Kelli Hall was abducted, raped and murdered in St. Charles. He says he might or might not have committed the crime. However, he has taken responsibility for the crime and is ready to pay the ultimate price. Ferguson is to be executed by lethal injection at midnight on March 26th.

“Drinking and drugging, and blacking out every night,” he said. “For the last two years, I would drink until I passed out and then I’d wake up places I didn’t know where I was at and what I did. And this night I went out with these guys and we abducted and sexually assaulted and killed this gal, I don’t even remember seeing this gal. I don’t know how I got home that night, none of that. But, you know, maybe … the way the prosecutor said … I don’t know, it seems a little far fetched that a guy in that bad of shape would be able to do all that but … they gave me the death penalty.”

Ferguson said he was weak and didn’t have any faith or courage.

“I should have been a better man,” he said. “This is what you get.”

Ferguson seems conflicted on whether he wants to live or die. He says he wants to live, and that the death penalty doesn’t bring justice to victims’ families, but that he’s a Christian man and ready to “meet his maker.”

“It was 25 years ago, this is just a terrible way to do things,” he said. “I’m not complaining about being put to death, you know, kill me. I’m going to go to heaven to be with my Lord and Savior. That beats this place.”

Meanwhile, he said he’s talking to his family to get funeral arrangements in place and try to make this as easy as possible on them. He knows he cannot do that for Kelli Hall’s family. He is sorry, but said he has no words that can take away their pain.

“They had this bad thing happen to them,” he said. “They don’t need to have my name shoved in their face, and they don’t need to have their wounds opened again like this execution’s going to do. They’re going to bring them down there … stick microphones in their face, they’re going to start it all over again. It’s going to be like the first day for them all over again.”

This isn’t the first time Ferguson’s number has come up. He was scheduled to die by lethal injection in 2011, after Martin Link, when the state’s three-drug protocol was brought into question. Link was the last offender in Missouri to be put to death using the three-drug cocktail containing sodium pentothal, which renders the offender unconscious, followed by pancuronium bromide, which causes paralysis, and finally, potassium chloride, which stops the heart.

Since then, four offenders have been put to death using a single drug protocol, pentobarbital. It’s the same drug commonly used to euthanize animals and was once the standard drug used to put people under before surgery.

Ferguson thinks the process is cruel and unusual, but he’s not talking about the clinical aspect. He said he was prepared to die three years ago, “packed up, ready to go.”

“I told everybody it was their last visit,” he said. “You talk about cruel and unusual, it’s like somebody takes a gun and has a bullet in it and they play Russian Roulette with you and they keep clicking the chamber and they keep pointing it right at your head and you know they’re going to kill you, and ‘click’ and then it’s like, ‘Well, hang on a minute, let me re-load.’

Ferguson said his lawyer is still working to get the execution stayed or to get his sentence commuted, but that he doesn’t put too much faith in that. He said the only person that you can count on in life is Jesus Christ. And because of that, he’s making plans with his family for his funeral.

Previous Post: « Blues ready for another showdown in Chicago. Blackhawks coming off a physical OT loss in Philly while Blues come in fresh
Next Post: Beef, pork, milk prices high and predicted to climb »