You are here: Home / Sports / Steve Cash, of St. Louis, shuts out Russia as Team USA wins the gold medal in sled hockey at the Paralympics in Sochi

Steve Cash was money for Team USA in the nets, delivering another shutout and another gold medal. (photo courtesy/USA Hockey)

St. Louis, Mo., resident Steve Cash, who is the goalie for the Team USA sled hockey team, shutout the host country Russia in the gold medal game, in a 1-0 final.

If you want to wish Cash congratulations, send him a Tweet. 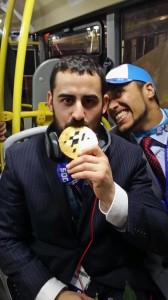 Cash was diagnosed with osterosarcoma (bone cancer) of the right knee in October 1992 and underwent amputation surgery at the age of three. He’s been a member of the U.S. National Sled Hockey Team since 2005. He has played in over 90 career games and has over 25 shutouts.

Cash needed to stop just six shots in front of a strong defensive effort by the Americans, who killed two Russian power plays.

U.S. Marine Corps veteran Josh Sweeney (Glendale, Ariz.) scored the game-winning goal in the second period. With the victory, Team USA becomes the first team to win back-to-back gold medals in the Paralympic Winter Games in sled hockey. The gold medal is the third for the U.S. since 2002.