You are here: Home / Sports / Drury University and Central Missouri advance in NCAA Tournament. Truman St and UMSL out 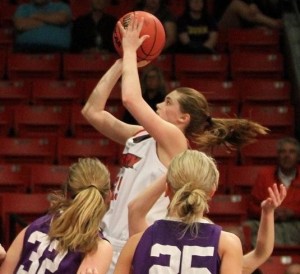 Drury University guard Annie Armstrong scored a career-high 22 points, including the driving bucket to send it to overtime, as the top seeded Panthers escaped with a 74-68 victory over No. 8 seed Truman State in overtime of the NCAA-II MIdwest Regional women’s basketball tournament Friday night at the O’Reilly Family Event Center.

Amy Briggs put Truman State up 65-53 with a three-pointer with 1:15 to go, but both teams turned it over twice in the final minute before Armstrong’s running jumper with 10 seconds left tied at 65, and Briggs missed a potential game-winner before time expired.

Nicole Gloor led five Truman State players in double-figures with 15 points, but the Bulldogs were hurt by 37-percent shooting (23 of 62) and a 43-27 rebounding deficit. In addition to Dvorak’s 12 rebounds, Dressler finished with seven boards and Bethanie Funderburk and Shields added six each.

Also in Springfield, 2nd seeded Lewis rallied for a 69-64 victory over No. 7 seed Missouri-St. Louis.

Senior forward Devonna Smith had 23 points and 11 rebounds in her final collegiate game to lead UMSL, which outrebounded the Flyers 40-29, but was hurt by 17 turnovers to just 10 from Lewis.

“I thought it was a very hard-fought game and I thought everybody who stepped on that floor today played hard and the coaches coached hard, and I thought it was a well-officiated game … it was just a great game,” said UMSL coach Katie Vaughn. “At this time of year, I think that’s all you can ask for. It’s March Madness … two teams go out there and battle, and not everybody can come out on top.”

2nd seeded Central Missouri hit nine three-pointers as they earned an 82-69 victory over Northeastern State. The Jennies hit 25 free throws and only turned the ball over five times to earn a date in the semi final round.

Keuna Flax came just shy of a double-double to lead UCM scoring 21 points and pulling down nine rebounds. BreAnna Lewis hit four from behind the arc to scored 19 points on the night. Justina Prairie Chief scored 14 points and Revonnia Howard had 12 points and nine rebounds.

The Jennies enjoyed their first NCAA Tournament victory since March 10, 2006 against Angelo State (79-68 win) in the Central Regional quarterfinals.

The Jennies will match up with Concordia St. Paul in the regional semifinals tomorrow night at 7:30 p.m. from Rhodes Field House in Searcy, AR.