A state law that forces funeral protesters to stay 300 feet from has been upheld by the Federal District Court for the Western District of Missouri, but that won’t stop members of Westboro Baptist Church from picketing, nor will it keep them from filing suits that claim the law is unconstitutional. 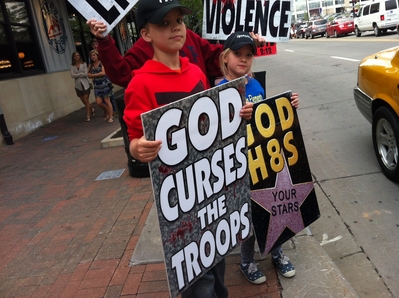 “The latest ruling was a teeny tiny skirmish in a bigger war,” said Margie Phelps, eldest daughter of Westboro’s leader, Fred Phelps. “The bigger issue that’s being litigated and will probably make its way back to the Supreme Court — either out of Missouri or Nebraska — is whether we’re going to gut the first amendment.”

Margie Phelps and her sister, Shirley Phelps-Roper, have led the legal challenges to the law, claiming it infringes on a right to free speech. The ACLU agrees with them.

“And by that I mean start putting massive distances between big mobs that are out engaged in patriotic pep rallies outside these death events and this little church with its picket signs with an opposing message, that’s really what the battle is,” Margie Phelps said. “And of course that’s against the backdrop of a bigger battle, which is the soul of this nation.”

She said the law is prohibitive because it allows certain groups to gather outside of funerals, but not others.

“It’s a misnomer that they’re there to block us,” she said. “That’s an urban legend that’s been perpetuated by the media. Long before we ever started going out with picket signs to these death events — for at least two years — these bikers and military and citizens were piling up en masse outside these events with a ‘God Bless America,’ flag something approach.”

“It is not a blessing for your young son or young daughter to come home in little pieces in a body bag,” she said. “So we joined the discussion. They’re not there to block us. They’re there to rage against God for what he’s doing to their soldiers.”

Now, she says, the question for the United States Supreme Court is, do they hate the church’s message so much that they will keep piling hundreds of feet onto where church members are allowed to picket.

“Meanwhile, everyone else and their uncle and their dog can be right outside the front door,” she said.

Margie Phelps said as long as there is a first amendment, and the United States claims to be a nation of laws, members of the Westboro Baptist Church will continue to carry its anti-gay message to venues it deems appropriate.

“When you pass laws against us and they become prohibitive in how they’re applied, we’ll challenge the laws and hold your feet to the fire of your own laws,” she said. “But more important than that, you can put us a million feet away and we’re still going to stand out there with signs and work with social media that was invented for us, and in every lawful way, put these words before this generation’s eyes, because that’s our duty.”