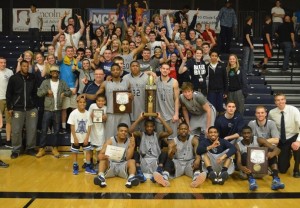 Columbia College is headed back to the NAIA National Championships.  (photo/columbiacougars.com)

Meeting for a third time this season,4th-ranked Columbia College and 8th-ranked Freed-Hardeman provided plenty of drama in the American Midwest Conference (AMC) Tournament Championship game on Tuesday night at the Arena of Southwell Complex. Freed-Hardeman battled back from eight points down late in the second half to force overtime, but it was the Cougars pulling away in OT for an 86-78 victory to clinch their third straight tournament championship.

Freed-Hardeman pulled within one at 77-76 with 1:45 to go in overtime, but Columbia up by four on a three-pointer from the right corner by Derrick Dilworth, who led the Cougars with 20 points. The Lions closed to 80-78, but the Cougars made two crucial stops and hit six of eight free throws in the final minute to punch their ticket to Kansas City.

Columbia will head to the NAIA Men’s Basketball National Tournament with a record of 31-2. The bracket will be announced Wednesday night at 7 p.m.

Last season, Columbia went 35-0 and lost their only game of the season in the quarterfinals, falling to LSU-Shreveport 79-78.