You are here: Home / News / Nixon: Trade deal with Canada worth $3.2 billion (AUDIO)

Gov. Jay Nixon is in Canada, where he says a $3.2 billion dollar trade agreement with Québec nets Missouri a 15 percent increase in exports over the next four years. 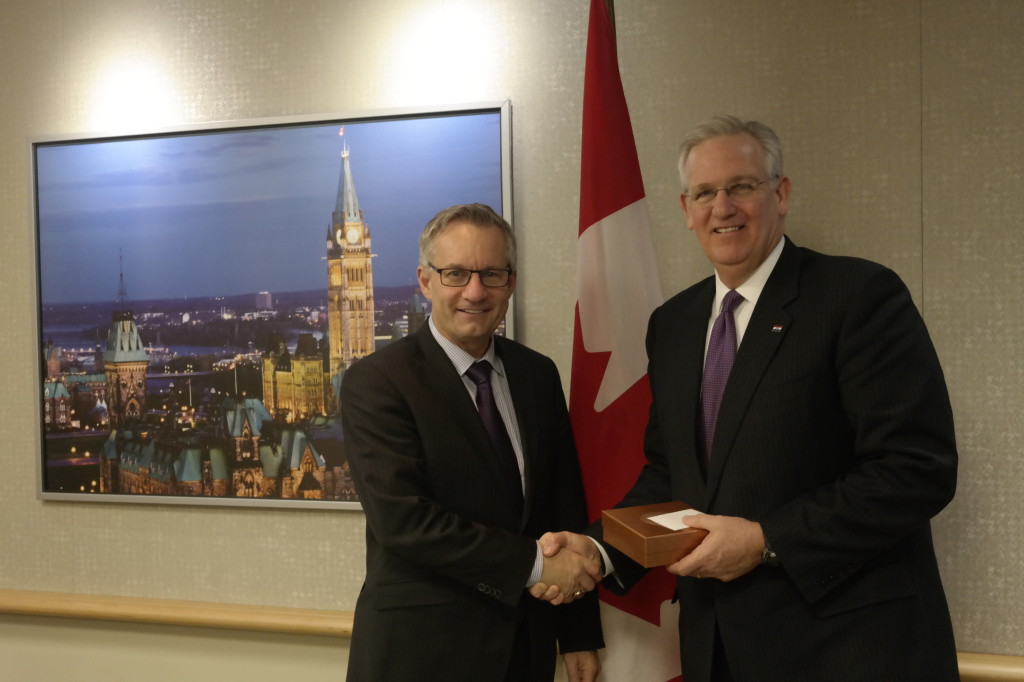 Nixon says the mission has led to an agreement signed by Québec’s Minister of Industrial Policy Élaine Zakaïb, and Missouri’s Director of Economic Development Mike Downing.

“Selling more Missouri goods abroad creates more Missouri jobs back home,” Gov. Nixon said. “That is why I am pleased to report that our trade mission to Canada has produced some very tangible results. Canada is our largest trading partner, and this $3.2 billion agreement with Québec will solidify this relationship while strengthening Missouri’s economy for years to come.”

The agreement calls for the state and the province to expand bilateral trade and investments in several areas, including aerospace, agricultural products, advanced manufacturing and life science products.

“Last year alone, Missouri exported $12.9 billion in goods to 189 countries, but we’ve got to keep that up and that’s why we’re here,” Nixon said on a conference call. “If you look at the bilateral trade, the numbers going both ways, we export about 4 billion to them, a little less than 3 billion comes into Missouri. That 7 million in bilateral trade supports more than 140,000 jobs. Obviously we’re here to build on that strong foundation.”

Nixon has met with leaders in Montreal, Ottawa and Toronto to discuss new opportunities to sell more Missouri products to Canada, and to expand investments by Canadian companies in Missouri. Nixon addressed members of the American Chambers of Commerce in Ottawa and Toronto. He also met with Canadian Foreign Minister John Baird, Minister of Trade Ed Fast, and has visited Magna International and BMO Financial.

Tomorrow, the Governor will meet with Prime Minister of Ontario Kathleen Wynne, and Minister of Economic Development and Trade Eric Hoskins.

A look at the numbers

The delegation returns to Missouri March 6. The Hawthorn Foundation, a nonprofit organization dedicated to promoting economic growth in Missouri, has financed the trip; no state taxpayer money has been used.

Nixon has traveled to several other countries to expand Missouri’s export market overseas, visiting and signing deals in China, Brazil, Korea, Europe, and the Republic of China (Taiwan).